Trust and Believe God Removed Them For A Reason!

You ever had a relationship with a friend and then one day you just don’t anymore? You don’t remember an argue or a disagreement. You can’t think of anything that would make your relationship with them change. As you pondering, you make the mistake that many of us make! You pick up the phone and you reach out because you want to know what happened? Now what your forgetting is that you have come to a crossroad in your life! You have grown stagnant and your feel as if you just need a change.

You had been praying that God would help you and give you direction. You have asked that whatever has been making you feel so low He removes. Now let’s get back to that phone call! You call the friend and you ask what happened? The friend begins to tell you all of the stuff that they have been going through, and you began to feel your energy lower. You become entrenched in their problems and you start trying to give them advice. You guys talk for about an hour and you get off the phone feeling good that you guys had talked.

It is night time and your still trying to figure out how you can help your friend with their problems. You can’t sleep and the thought of helping them is consuming you! The next morning you rush to call your friend because you have thought of some ideas that can help them. You call but you get no answer. You try several more times and no answer. You become concerned, and you think you should just go over to their house. You get to their house and it is them and a couple other people sleep.

Now you’re thinking how you just stayed up all night concerned about their problems and here they are sleeping soundly. You wake them up and they are made at you. You tell them that you found some jobs that are hiring since that was one of their issues and they tell you they don’t want to work there. You tell them about some school programs because they were interested in going to school and they tell you it is too far. Then out of nowhere one of the people that were at the house starts laughing and says I see what you mean about you, he/she is nosey!

The moral of this example of you getting what you prayed for is this. You have to stop asking God to take the wheel and when he does, you fight for control of it again! People come and go out of your life for reasons. You see some friends are for that season. They have come into your life for that moment that they are required. It is like they might provide you with certain lessons for that level and once you have defeated that level, you now move on to the next! It does not mean they have done something to you, it doesn’t mean that you’re too good, it simply means they have served their purpose for that level.

Now I am not saying there is no such thing as life long friends, but remember we pick our friends, but real situations sort them out! You have to stop not believing people when they show you who they are! Remember this, sometimes your world “crumbling” might simply be God’s protection against the things you cannot see! 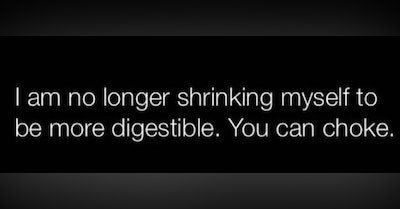 Heavy Is The Crown

I sometimes want to complain about situations in my life. I am human and I want to run like many people to social media and just vent, but i quickly jump…

I Can’t Help How You Choose To View Me

Listen, people spend an abundance of time worrying about how another person views them! People will change their clothes a million times just to get the …